skip to main | skip to sidebar

My name did not appear in ET Power of Ideas, second list where 254 out of 1000 were selected. The sad part was that I knew it about it as soon as my qualifying telephonic interview with Ranjeet Shastri of IAN completed.
Reason - Over confidence. I did not do any mock before the disucssion and was very casual.

I also could see a patter where I easily cross initial hurdels and then loose interest and become careless in most of the deals.

Any way, this was a good lesson learned hard way. So my commitment is to be serious and remain serious and won over 90% of deals
Posted by Vinay Chaddha at 10:28 AM No comments:

On Friday May 15,2009 I attended a two hours discussion at Mr Swarup's residence (TiE Charter Member) at Vasant Vihar.

Geetika of TiE modertaed it and Ashok Das (Sun Moksha, Banglore) was the key speaked. he already has a SIG at TiE, Banglore and head a company on solar technology. He shared about his views on govt policies, future of cleantech and wide meaning of clean tech.

Other participents that I met included Anil Garg(AGM Marketing) Hero Electricals. He shared how poor govt policies has resulted in poor sales of Electrical Bikes in India where only 2L bikes has been sold till date again china which has electrical bikes in millions becuase of Govt Support Policies.

I also met Dolly Bhasic of SPH Consultancy and Services. She knew a lot about BEE and lot of information about Govt Tenders.

Bharat Shrama Technical Director of Vin Industies (also a landmark graduate) talked about his vision of using Cowdung to produce power at villages. He has roots in Rajasthan where his ancestors had large herds of cows and he plan to use Go-shala as source of cow-dung and set up small electrical stations.

Rilka from Austraila who head Indian office of Beyond Business Connections, Anil Srivastava of Global Economic Advantage Pvt Ltd, Pranet Gupta of Booz&Co, Shiv Walia of Mauryan Capital Advisors are few more persons that I met.
Posted by Vinay Chaddha at 10:16 AM No comments:

I made a presentation on FICCI Seminar 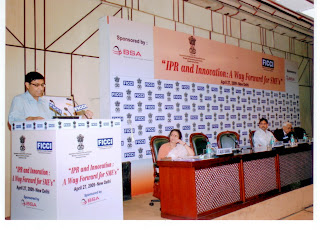 On April 27th, I made a presentation at FICCI seminar on IPR and INNOVATION - A Way forward for SME.
Presentation focussed on my experience  about making progress using innovative ideas and how IPR can help protect innovations and result in sustained profits.
Just for records I have files three patents and applied for trade mark "Joy-n-Freedom"
Posted by Vinay Chaddha at 12:29 PM No comments: